How to prepare the authentic canarian stew

One of the most traditional dishes in Spanish cuisine is the puchero canario, an excellent option for eating with a spoon.

It is a dish full of flavour and colour thanks to the different types of vegetables, meat and vegetables it contains. Although it may seem the opposite, this Canarian stew is a very light recipe, so it can be eaten during the autumn and winter, and also during the warm seasons. 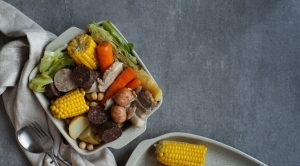 History of the puchero canario

The origin of the puchero canario is to be found in the traditional cocido of the Iberian Peninsula.

The different cultures that have influenced the Canarian people throughout their history have also contributed to the emergence of different interpretations or variations of traditional dishes from other regions.

A paradigmatic case of this influence can be found in the potaje canario, whose origin has much to do with the typical Portuguese potajes.

Puchero canario was originally a rural and humble dish, made with the products of family farms and gardens.

Later on it became a typical dish for parties and celebrations, especially because of the laborious way it is prepared, which makes it not advisable for working days, when there is less time to be between the fires. 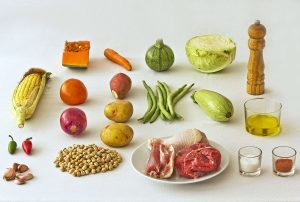 The recipe for the pout contains 15 ingredients. The first thing that is served is the broth. As it is a very copious dish it is usually eaten in 2 days.

Now let's see what the ingredients of the recipe for puchero canario are:

Recipe of the puchero canario

The puchero canario is perfect for those days when you want to eat a very complete dish but at the same time you want to have an easy digestion.

Now let's see how to combine all the ingredients we have indicated in the previous point. 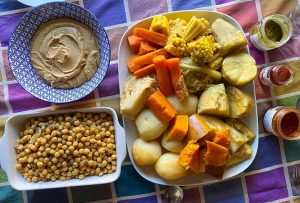 The recipe for the potaje or puchero canario is so traditional and homemade that it allows for many variations. In each house it is prepared in different ways, removing or adding ingredients, and it is served in different presentations.

For example, there are those who prefer to enjoy this traditional Canarian dish in the form of "chafado", mixing it with pancetta or bacon and adding sweet potatoes or potatoes.

It is also very common to present it in the form of a broth, with minced vegetables and meat.

If you have part of the puchero canario left over, which is often the case, you can make the dish popularly known as "ropa vieja", in which the ingredients are gathered and fried. It is also possible to add rice to it, which will give you a very tasty dish.

In Spain there are many recipes that resemble the Canary Island stew, each region having its own characteristics. Some of the best known Spanish stews are the cocido madrileño, the puchero andaluz, the escudella catalana and the caldo gallego. 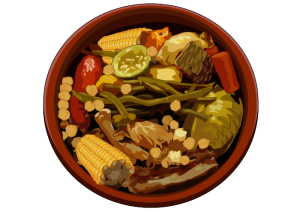 The puchero canario is a very tasty and light dish, and the latter must be by force. In the mild climate of the islands, an eternal spring, heavy dishes that are difficult to digest do not fit well. Therefore, go to the Canary Islands in winter or summer, it will always be a good time to enjoy this delicious stew.

Menu
AntPreviousGofio mousse: the sweet side of the Canary Islands straight to the palate with this recipe
NextHow to prepare Canarian roast legNext