The black Canarian pig is a Spanish breed of pig that is present in all the Canary Islands. The pig already existed in the archipelago since at least 2500 B.C. The Guanches used it for lard, meat, ornaments, tools and skins for clothing.

The current breed of black pig has its origin in the crossing of that breed of Canarian pig with the Iberian and British breeds brought to the Canary Islands after the Spanish conquest. 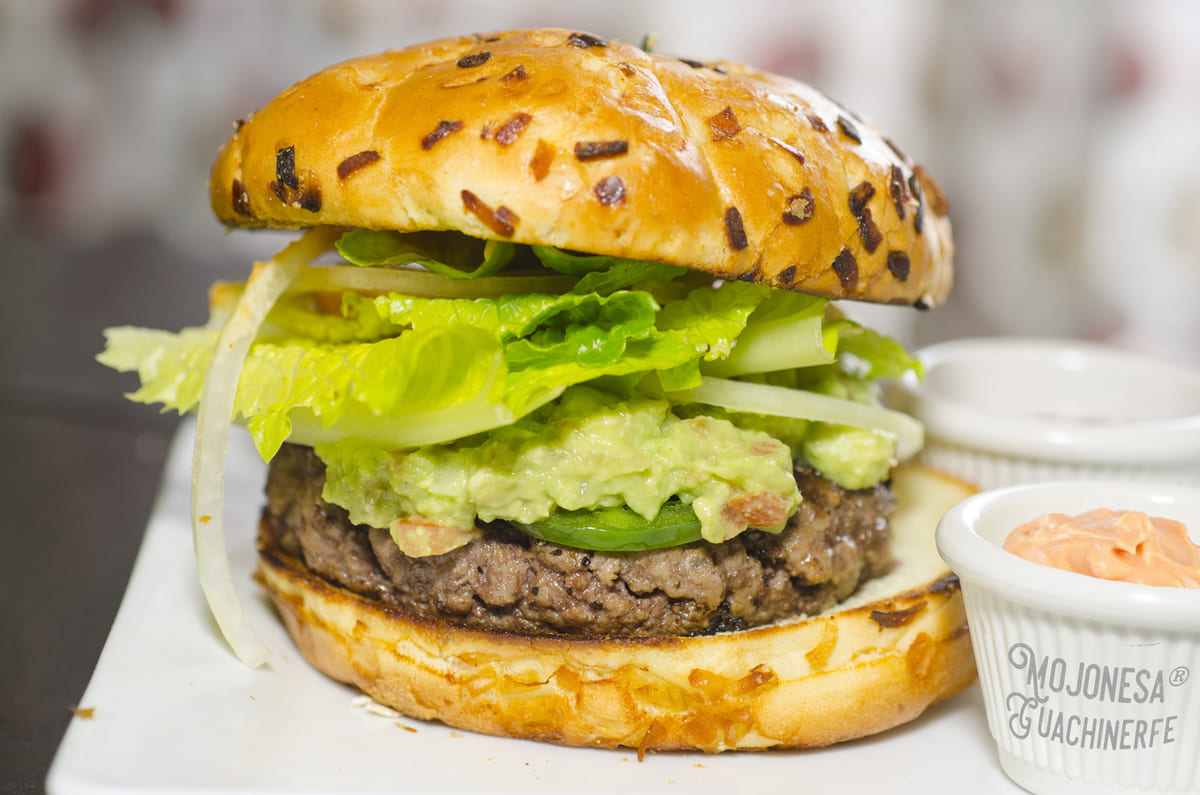 Canarian black pig and its particularities

The characteristics of the Canarian black pig are very particular. Its weight ranges between 130 and 160 kilograms; its profile is ultra-concave (with a greater dip in the central part) and has folds.

Its skin has many scales, with numerous long and strong bristles all over its body, and its colour is black, although some specimens have spots on their belly, forehead or on the end parts of their limbs.

The head of the black canary pig is short and small, with pronounced wrinkles that can cover the eyelids. The ears are drooping and long, and can reach the end of the muzzle. For its part, the dewlap is considerable and his chest is not very pronounced. It has thin and short legs. 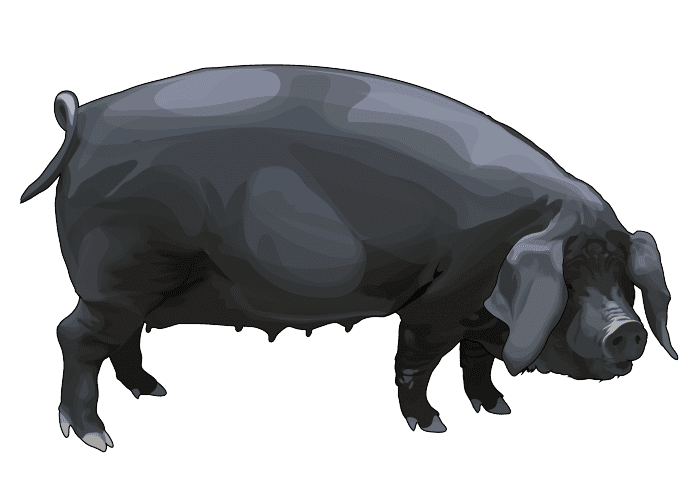 The meat of the black Canarian pig: a value gourmet

Although the production of the white pig is cheaper than that of the black pig, the exquisiteness of the meat of the latter and its great demand makes it profitable for the Canarian farmers to breed it.

The quality of the black Canarian pig can be compared to that of the Iberian pig, as both have a high percentage of infiltrated fat. It can be said that the Canarian pig is the "jabugo isleño".

3 ways to eat black pig in the Canary Islands

The black pig is an exquisite dish in any of the forms in which it is prepared. Here we show you some that are finger-licking good. 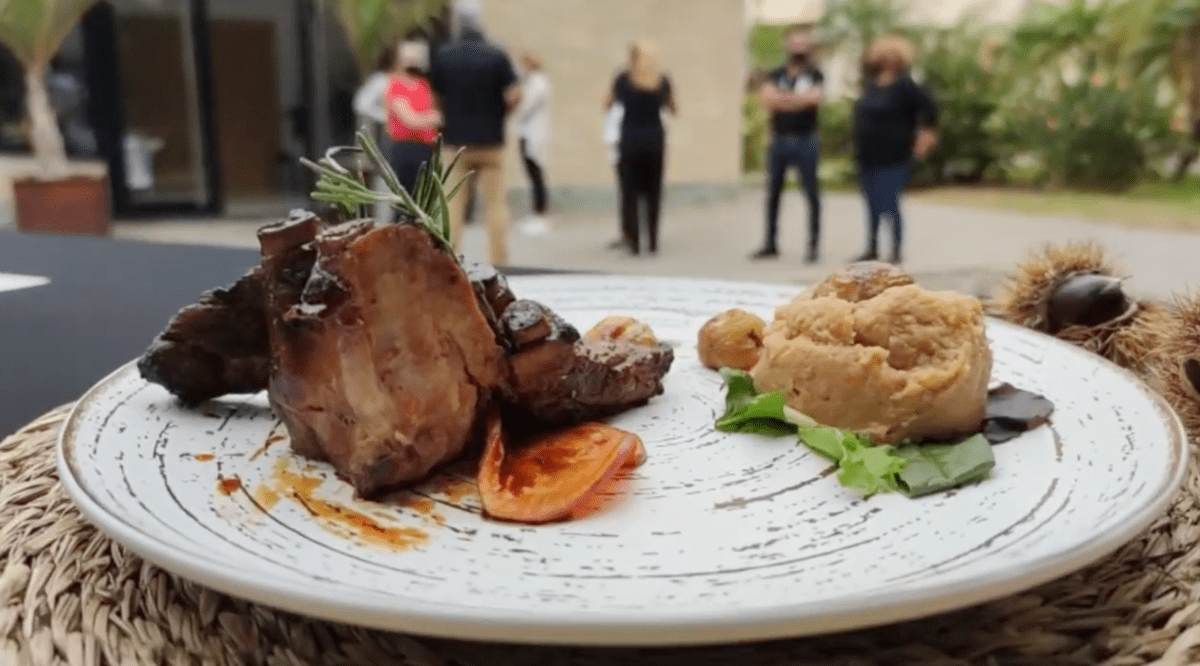 The ingredients for the black pork confit are: 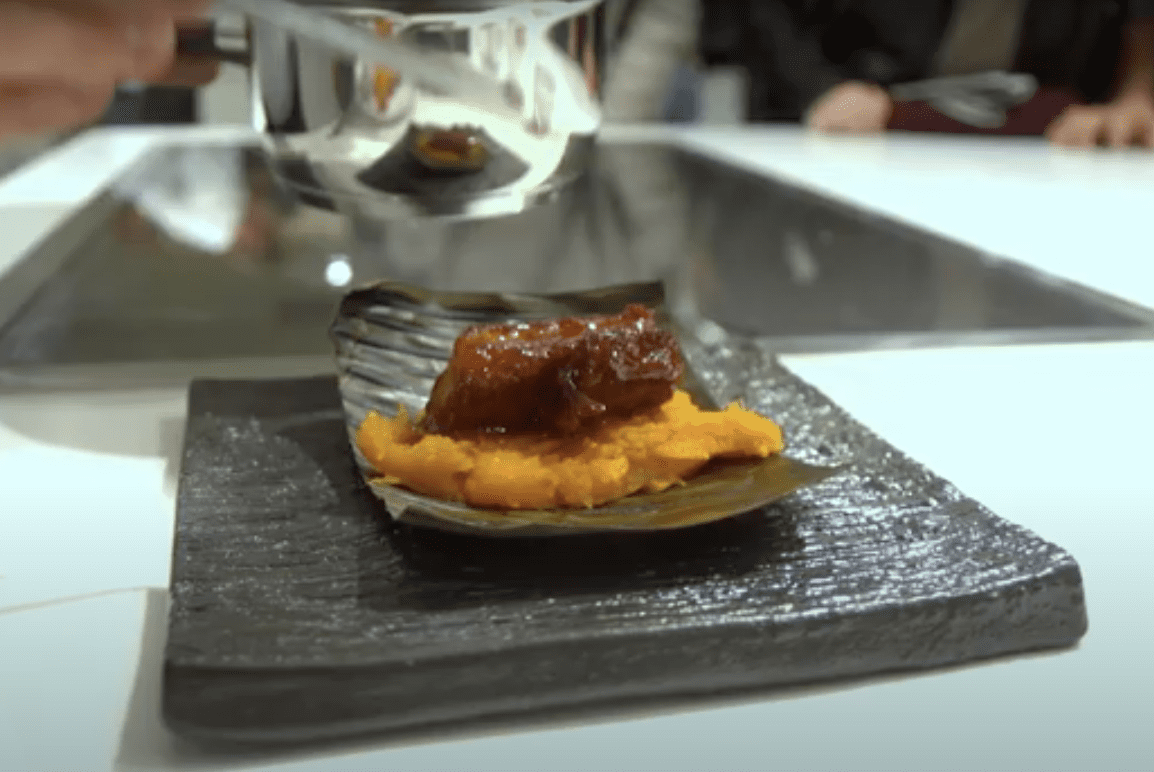 For the meatballs you will need:

As for the olive sauce, it will be enough for you:

To confit the tenderloin, season with salt, pepper, paprika and sugar. When finished, set aside. Place the medallions in a high bowl with the olive oil and lard. Season with black pepper, bay leaf, thyme, celery, leek, garlic, carrot, green pepper and onion. Let it cook for about 4 hours. 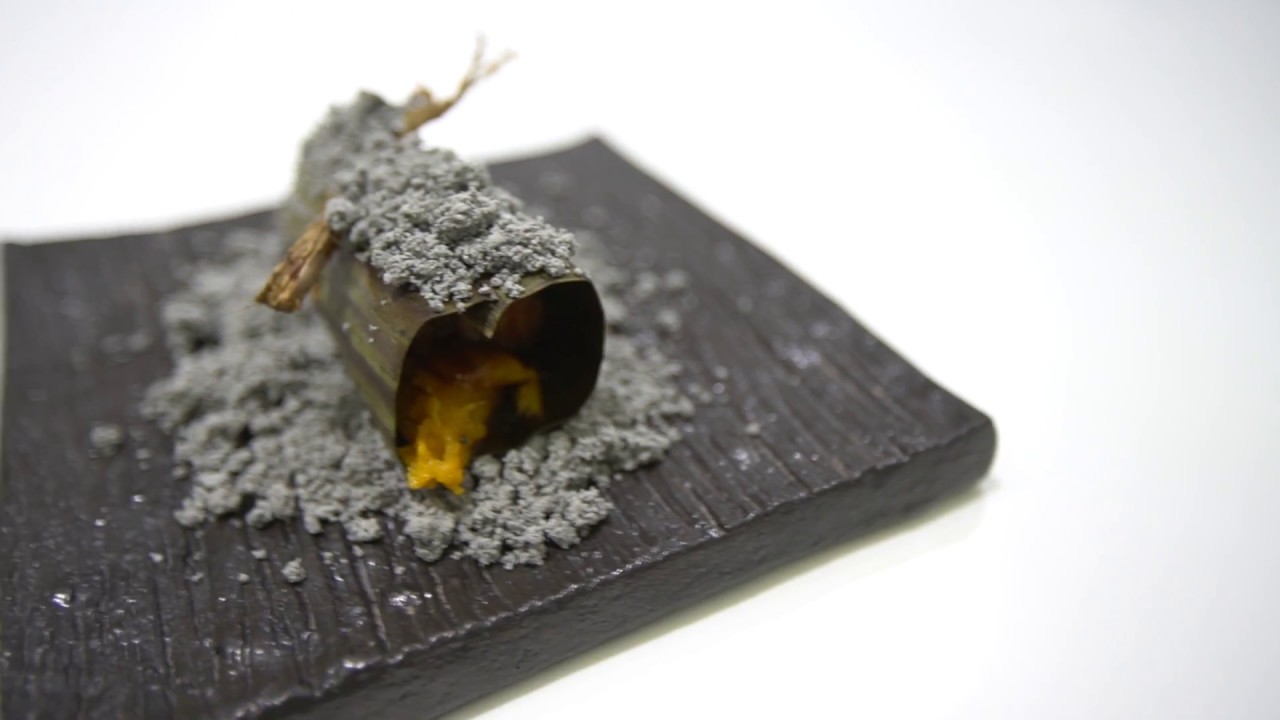 To make the meatballs, grind the corn on the cob and add the butter and sugar. After grinding, add the soft cheese, also ground, mix and make the balls. Dredge them in flour and fry them.

To make the olive sauce, put theolives on the heat with sugar and sherry vinegar, reduce, grind and set aside.

When it is time to assemble the dish, place the thick loin medallions in the centre of the plate with a base of confit juice, 3 meatballs and a little olive sauce. 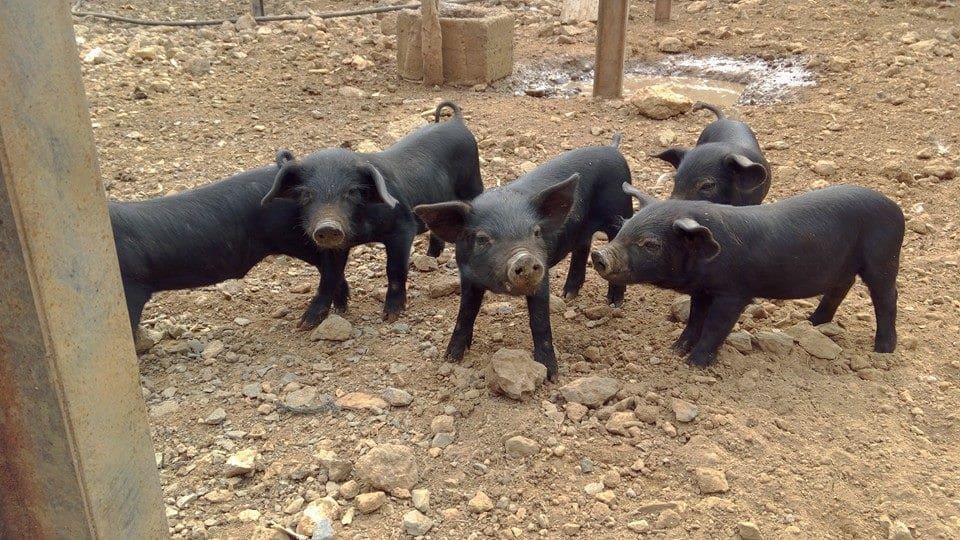 This is a recipe for 3 people for which you need the following ingredients:

To prepare this dish you must season the chops with salt and pepper and crush parsley, garlic and oil.

Coat the chops with the mixture and let them marinate for a few hours, even overnight.

Prepare the stuffed tomatoes and the mushroom scrambled eggs.

Fry the cutlets until golden brown. Then remove them and place them on kitchen paper.

To serve, place the chops, the tomato and a portion of the mushrooms. 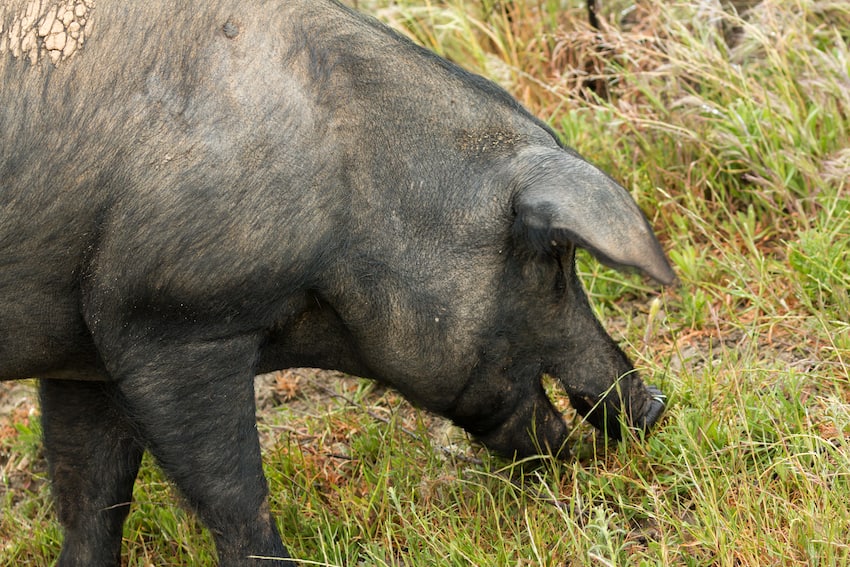 Canarian black pork sirloin with figs from the herreño region

The ingredients you will need are:

To prepare this dish you must clean the sirloin and stuff it with 50 grams of figs. Season with salt and pepper and brown it in a frying pan. Finish cooking in the oven.

Reduce over medium heat the red wine with the rest of the figs, until you see that they have taken texture.

Serve with 2 sirloin medallions per plate, seasoned with the wine reduction. Place some figs and add sea salt flakes. 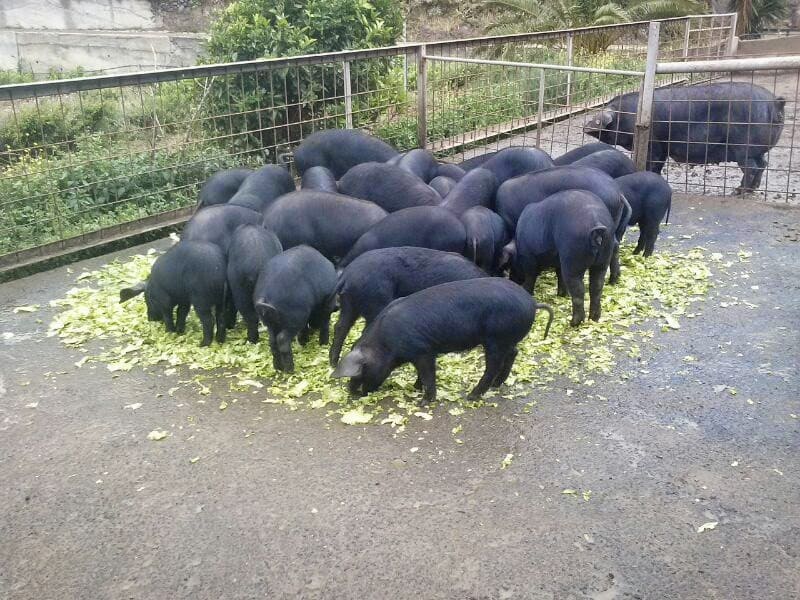 The black Canarian pig is another of the delicacies of the wonderful Canarian gastronomy, which lacks nothing. The proverb says that "the pork, even the pig's feet", and there is no doubt that in the case of the Canarian pig the maxim is 100% true.